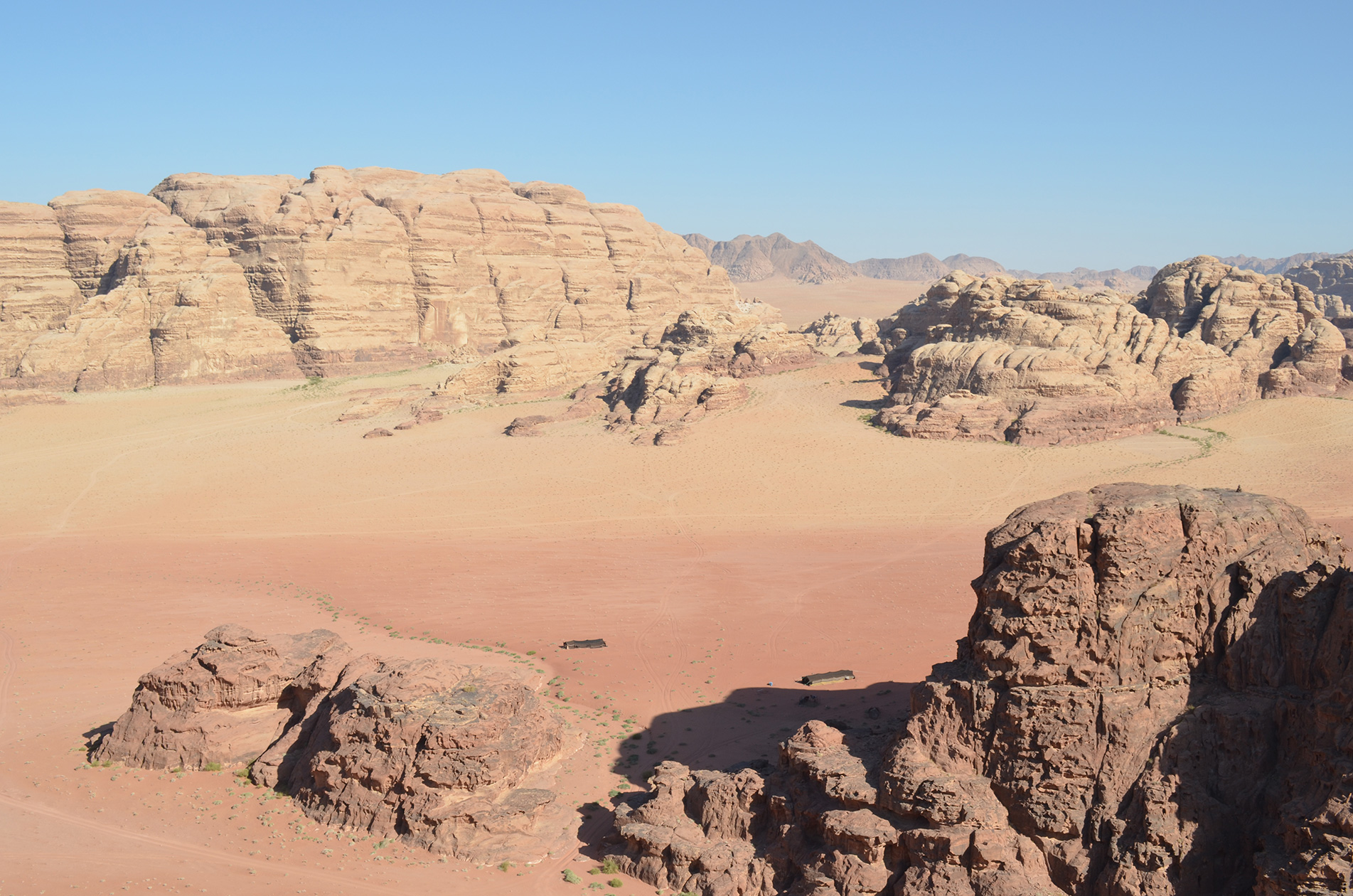 The purpose of this chapter is double :
1) to make the reader aware of the kind of tourism practised by everyone here, and its consequences

2) to point our difference : a true ecotourism

On the web..
The choice is wide, of websites promoting Wadi Rum, all of them offering a large variety of activities.
Beduins, agencies, tourist companies, local hotels.. all offering and selling “desert adventure”, “bedouin life”, under of course the mythic name of Lawrence of Arabia !

The word “beduin” is used everywhere, and it’s logic : the desert is the land of beduins, and you’re also here for them !

When reading the attractive presentations, you may think you’re gonna meet beduins, discover their life, spend the night in a bedouin camp (a bedouin tent).

Well, not really.. not at all, to speak the true !
It was the case before, but that time is over now.

A new way of handling tourists has developped in Rum since 5 to 10 years, boring and repetitive

It consists in a “tour”, a kind of circuit, always the same according to the choosen duration (counted by hours, until the “full day”). (See “Desert discovery”)

A driver, often very young, executes the work, meaning stopping the 4×4 at the first “site”, the time for the tourists to take photos, and for him to have a chat with his companions working the same tour, then starting to the next site, and so on until the end of the program.

The bedouin driver finding his friends at each stop, it helps him pass the time.. For the tourists, as Wadi Rum landscapes are gorgeous, and as they don’t know the desert, they wouldn’t complain. They think that’s the way..!

A word about the main attractions (listed everywhere) :

– Lawrence Spring : a water spring coming out of the mountain 100 meters above ground level, and capted by a pipe to reach ground level.. A “tent-shop”, selling tea and souvenirs, and nothing much to see, except groups of tourist !

– Khazali Canyon : a most impressive mountain, with beautiful Thamudic carvings, on both walls of a narrow canyon, often crowded in high season.
The game consists in looking up with a 20 to 30 degrees angle, and see human couples – very thin and delicately shaped, goats (or ipex ?).. and pairs of bare feet (!) so realistic !

– The Small Arch : a funny little rock bridge, on top of which you can climb in 2 minutes.. but recently awfully degraded by unscrupulous locals. Not less than 2 illegal permanent and concrete campsites have been built last year without any authorization (they’d never get one), just next to the arch ! (for more info, see Wadi Rum / preservation / what can we do ?

– The red sand dunes : a beautiful sand dune, of gorgeous red color, on which you can climb (from the crest line), and from top of which running down (straight down) is so great ! (then you take tons of sand out of your shoes, part of the fun..)
500 meters away, a second one, 2 times bigger, is waiting for the braves !

– Lawrence House : a huge stone wall on the side of a majestic valley. Not really related to Sir T.E. Lawrence, but a great landscape !

– Al-Barra canyon : a valley between high mountains, 4 km long, along which you can walk.
A little crowded during high season…

– Burdah Bridge : a big arch on top of the jebel Burdah, that we see from the ground usually. Climbing on top is possible, but only for those who are at ease on high rocks, and not subject to vertigo !

– Um Fruth Rock Bridge : a curious arch on ground level, on top of which you can climb : not so easy, but fun.

Our point of view :
These sites are not equally worthseeing, and often crowded by jeeps and tourists in high season.
Reducing the visit to them only, as most tours do, would be too bad !

We will stop there, but not staying too long time. We may even keep away from some of them (as Lawrence Spring, of little interest, Lawrence House or Barrah Canyon, where you cross every car from Diseh and many trekking groups), to save time as to show you other great spots, where you find nobody.

Narrow siqs, secret (but easy !) paths leading to summits for the surprise of an astounding landscape… Wadi Rum is all of that !

Now, what about the evening, the overnight ?

It shows at first glance : the “bedouin camp” where tourists eat and sleep has very little to do with a genuine beduin tent ! And with a “camp” either.

Most of them are real touristic complexes, where electric lightening replaces wood fire and stars.

Dining room with tables, bungalows aligned geometrically, plus concrete toilets and kitchen, with an egyptian cook, just as in a hotel !

Theses so-called beduin camps (hotels in fact), of quite wide dimensions and built without license for more than a half, are expanding farer and farer inside the desert, severely damaging the virgin landscapes.

Their purpose is to offer all facilities to customers, which a total nonsense : if bathrooms and toilets are built all over the desert, and electricity provided, the desert will not be a desert anymore !

It’s even more of a nonsense because a large choice of accomodations offering all facilities are available at the true border of Wadi Rum, a 5 minute ride from the deep of the desert !

Even on a hiking program, you will have to go back to sleep in the same hotel-camp, or at best spend there the last night.

By a sort of mimetic effect, most of the locals, who are working as employees for the camp owners (who do nothing except supervising), are dreaming of becoming themselves a camp owner, a hotel owner, for themselves or to rent it to an agency (practice forbidden, but who cares ?).

And, as soon as they get the chance, they do it. They build, without any care of existing rules, without any authorisation.

Meantime, the authorities make no move in order to apply these protection rules established to prevent uncontrolled constructions.

In simple words : WADI RUM IS NOT PROTECTED AT ALL.

All of this give a rather pessimistic idea of Wadi Rum future.

Unless visitors, meaning you, who are reading this, cleary express their wish to live a true desert experience, and consequently refuse to sleep in these concrete camps !

And that’s possible, for, happily, the other way exists, and it’s ours.

Next: We are bedouins